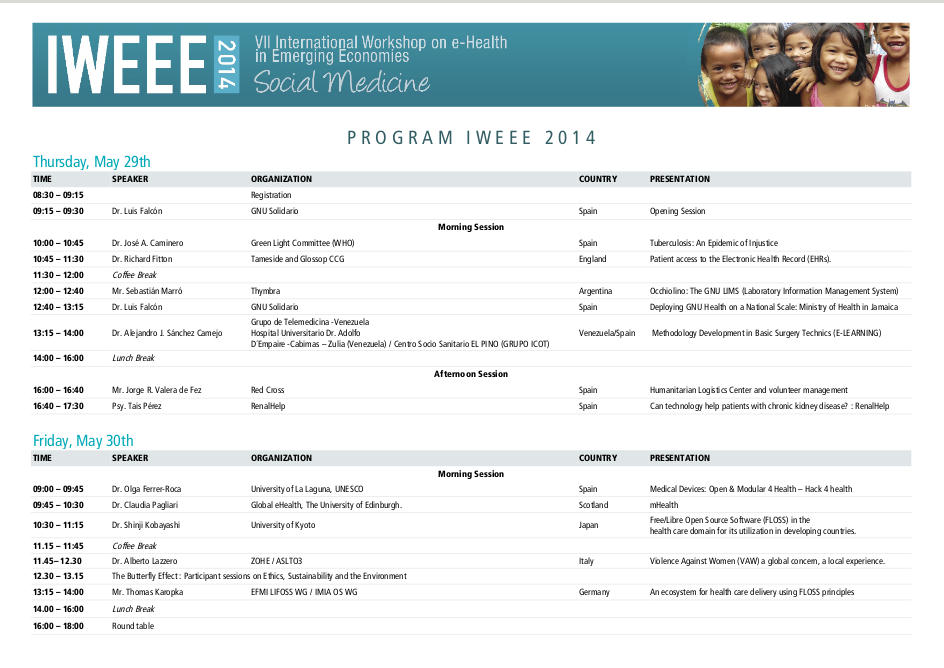 The program may be subject to small changes due to circumstances beyond our control.
Publicado por Selene Cordara en 10:33

Dr. José A. Caminero
Dr. Caminero is a pulmonologist with 25 years of experience working in the area of tuberculosis. In the past 23 years he has worked in the Department of Pulmonology, General Hospital of Gran Canaria " Dr. Negrin " (Las Palmas, Canary Islands, Spain ). Since 1995 he has worked at the International Union Against Tuberculosis and Lung Disease (The Union, Paris, France) and since 2003 he is the unit coordinator of multi-drug resistant TB (MDR -TB) for this organization. Dr. Caminero is a member of the Green Light Committee (World Health Organization ) since 2002. Between 1994 and 1998 he was the chairman of the Scientific Committee of the Spanish Society of Pneumology and Thoracic Surgery (SEPAR ).Dr. Caminero has worked in various areas of TB (including HIV) in more than 50 developing countries, including Latin America and others like China, India, Philippines, Pakistan, Egypt, Syria, Namibia and South Africa, among others. Since 1996 he has taught many courses on TB worldwide (in English and Spanish), with emphasis on clinical management. He has published over 150 articles, and more than 50 publications in English. He has edited the guide to tuberculosis specialists (La Union, 2004) and four other books associated with tuberculosis. Dr. José A. Caminero has given more than 300 lectures at international conferences, and has received numerous awards in various scientific societies.

Dr. Olga Ferrer-Roca
MD. PhD. Born in Barcelona, studied Medicine in the Central University of Barcelona from 1966-1972 with Honors. Got the PhD with “Cariotyping and tissue culture of tumors” in 1974 with Honors. Specialized in Pathology in 1974 being trained in Paris, Milwakee-USA and London. Working as pathologist in the Clinic Hospital of Barcelona since 1972 got the Assistance Professorship in Pathology in 1974 and the Chair of Pathology of the University of La Laguna in 1982 [...]Founded the CATAI association in 1993, being the president since then. Got the UNESCO Chair of Telemedicine in 1999 for the University of La Laguna. Since 1996 train on Telemedicine the students of medicine and Computer Science, creating the European Master of Telemedicine and Bioengineering applied to Telemedicine in 2004, at distance [...]

Mr. Sebastián Lucas Marró
Mr. Marró is an IT Specialist and ERPs consultant. Member of GNU Solidario and Board member of the Tryton Foundation. He is an active member of the Argentinian Tryton Group. He actively contributes to the development of the Tryton Localization in Argentina. He currently holds the position of Director of Technology at Thymbra, where he cooperates with the GNU Health Project. He has been working and promoting the development of Free Software. He has given lectures and training about Tryton, GNU Health and Free Software in Latin America and Europe.

Dr. Luis Falcón
Dr. Falcón (Las Palmas, Spain) holds a degree in Computer Science and Mathematics from the California State University (USA) and in Medicine from IUCS, Buenos Aires (Argentina). Luis is a social, animal rights and Free/Libre Software activist. In 2006 he founded GNU Solidario, a nonprofit organization that delivers Education and Health to developing countries with Free Software. He is the author of GNU Health (http://health.gnu.org), the award-winning Free/Libre Health and Hospital Information System. He is the founder and CEO of Thymbra, a company with focus on ERP and Health Informatics.

Mr. Thomas Karopka
Mr. Karopka studied communications engineering and worked for 10 years in the telecommunications industry before joining academia. In his academic career he worked in bioinformatics, ehealth and telemedicine. Currently he works as a project manager for BioCon Valley GmbH, a PPP responsible for life sciences and health economy in North Germany. Thomas is currently chair of the Libre/Free and Open Source Software Working Group of the European Federation for Medical Informatics (EFMI LIFOSS WG), chair of the International Medical Informatics Association Open Source Working Group (IMIA OS WG) and co­chair of the Open Source Working Group of the Internationl Society for Telemedicine and eHealth (IsfTeH CCTOS WG).

Dr. Richard Fitton
Dr. Fitton, qualified as a doctor at Guy’s Hospital, London SE1 1974 and at present is a locum General Practitioner at Tameside and Glossop CCG. He has done an Electronic Record Development and Implementation Pilot project 2001, was a member of the Department of Health “copying letters to patients” working group 2004 and of the Member National Care record Development Board 2004 to 2005. He was a member of the Wellcome Trust working group on the secondary use of GP data for research 2006, a member of the GMC production team of the first guidance on sharing records with patients and a member of the Royal College of General Practitioners and Department of Health Working group on patients accessing their records – in 2012. Engagement with Wellmed record USA in 1999 to 2001, the International Council of Medical compunetics conferences in 2006, 2007, 2008 and had consultations with the UNESCO moderator and ex secretary of the UNESCO working group on the use of human genetic data in 2008. He has presented at the WHO FIC Trieste 2007 and at the International Conferences on Urban Health Nairobi, New York and Manchester. He conducted the Joy Project 2003: 50 patients correcting their own record. Patients correcting records after the Shipman murders 2005 Tameside and Glossop PCT.

Dr. Alejandro José Sánchez Camejo
Dr. Sánchez Camejo is a surgeon from the University of Zulia (L.U.Z.). Faculty of Medicine. He has a Training residency in health care at University Hospital “Dr. Adolfo D´Empaire” surgical Department (2002-2005). Informédica Group. Applied Telemedicine course. February 2004. Miami – FL. USA. Final project: Teledismorphology. Applied to Telemedicine in diagnosing congenital malformations. he has a Master in Esthetic Medicine. Medical Aspects and Interventionists form the Balearics University. Palma de Mallorca, February 2007-2008. He has been giving multiple courses and workshops at national and international level, not only in the health care residence but also in the esthetic medicine specialization. He has published multiple publications on international magazines, as well as, participation at congresses as speaker at national and international level. He has excellent computer science skills on medical area. Venezuela Telemedicine group Founder (2005) at University Hospital Dr. Adolfo D'Empaire. University of Zulia. Cabimas (Venezuela). Member of the Spanish Esthetics Society (SEME). Member of the Official College of Doctors’ from Las Palmas de Gran Canaria.

Mr. Musa Suso
Mr. Suso is from Gambia and started working for Ministry of Health & Social Welfare in Gambia in 2004 . After the Health record Management training at Royal Vitoria Teaching Hospital he was posted to Farafenni Regional Health Team in the rural Gambia and also oversea the Farafenni Hospital as Regional Dater Entry Clerk. In 2005 after the Data Management training course with ICM London, he was promoted as a Senior Data Entry and again posted to Bansang Hopital in rural Gambia. After his BSc in Computer Science at the University Of The Gambia full sponsored by Ministry of Health and he was promoted as a Data Manager in the central Health Information System office and in June 2013  he was promoted again as an ICT office for the Ministry of Health.

Dr. Shinji Kobayashi
Dr. Kobayashi was born in 1970 Saga. He graduated from the graduate school of Kyushu university with MD, PhD. His research area is Open Source Software in medicine and Ruby implementation of the openEHR standards. He has been a lead of Medical Open Source Software Council in Japan from 2003.

Mr. Jorge Raul Valera de Fez
Mr. Valera de Fez Has a degree in Sociology and Social Sciences (Spain, 2002). A Master in Science of Labour and Education (France, 2005) and he has a Training as a Specialist in International Marketing (Spain, 2008). Jorge has been working and applying his knowledge in various companies, until he began his work with the Red Cross. He currently holds the position of Referrer Regional Volunteer, in charge of coordination and management of volunteers in the four counties of the island of Gran Canaria (Spain).

Please note the program sections, so you won't miss the presentations you're most interested in !

Help GNU Solidario with a donation !

As you already know, GNU Solidario is the NGO in charge of organizing IWEEE 2014.

Please, make sure to help the cause by spreading the word,  learning more about us, and making a donation ! 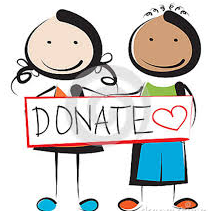 IWEEE 2014: Social Medicine, will be held at Salón Canteras - Hotel EXE Las Canteras -  in Las Palmas (Spain) - May 29-30.
Registration is already open, as well as paper and poster submission.

If you would like to book a room at the same hotel, please make sure to send a mail to make a reservation to: comercial@exelascanteras.com
Don't forget to mention that you will be attending IWEEE 2014 in order to get a special rate!
While coming to IWEEE 2014, you'll have the opportunity to visit the beautiful Gran Canaria.

We hope to see you in Las Palmas !
Publicado por Selene Cordara en 20:05

Paper and Poster Submission for IWEEE 2014 !

Please remember that paper and poster submission for IWEEE 2014 is already open !

If you have any questions, would like to participate to the event or present a paper/poster, please feel free to contact us.

IWEEE 2014 is a non-profit event organized by GNU Solidario.

Don't miss all the upcoming news we'll be publishing !